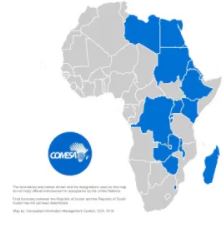 Libya plans to develop strategic projects with CMESA and the EU (Photo: Busiweek.com).

Libya plans to develop several coastal free zones to link with neighbouring African states through its railway project and create partnerships with the EU.

The revelation was made by the Tripoli government’s Foreign Minister Mohamed Siala yesterday during a virtual workshop. The workshop was jointly organized by the Tripoli Foreign Ministry and the Common Market for Eastern and Southern Africa (COMESA), of which Libya is a member.

The aim of the workshop, the Libyan Foreign Ministry said, was to educate the Libyan public and private sectors about COMESA programmes and deepen the interaction between them. It also aims to achieve regional integration through trade and the development of natural and human resources for the common benefit of all peoples on the African continent.

In his opening speech, Foreign Minister Siala indicated that Libya considers COMESA to be one of the most successful and important economic blocs in the African continent. Through it, he added, Libya strives to achieve sustainable development that comes through implementing mega regional projects in several projects. These, he continued, aim to contribute to creating competitive national markets for the member states, help attract foreign investment and enter global markets.

Siala urged the need to support youth and help them acquire the skills necessary to engage in the labour market to raise productivity rates and competitiveness and pursue joint cooperation to achieve knowledge integration.

The Minister reviewed Libya’s various contributions at the bilateral and regional levels and the role it played in building the African continent in economic and social development through investments and granting loans. These are distributed in more than 25 African countries, and provide more than 30,000 jobs for African youth.

He concluded his speech by saying that Libya aspires to have a positive role in COMESA and restore the previous momentum of Libyan investments, which contributed to the consolidation of the relationship with the African continent.

Libya wishes to contribute with its qualified and trained cadres in managing COMESA plans and programmes while investing in its strategic location to create a partnership with the European Union, he added.

African states should help save Libyan investments from ”obstacles”

The Foreign Minister stressed Libya’s desire to increase activity to create good joint opportunities calling on African countries to be aware of Libya’s role aimed at strengthening cooperation and partnership and called on African states to contribute to saving its investments from the obstacles they encounter due to their current conditions.

A number of Libyan entities participated in this two-day workshop, including Economy, Industry, Agriculture, the Central Bank of Libya, the Insurance Supervision Authority, the Customs Authority, the General Union of Chambers of Commerce and Industry, the Libyan Business Council, the General Company for African Investments, the Export Development Centre and the Libya Africa Investment Portfolio.