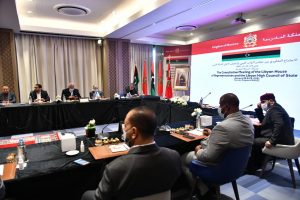 Twenty-six members of the Tripoli House of Representatives (HoR) have rejected the agreement signed in Morocco’s Rabat district of Bouznika by the HoR and High State Council (HSC) to distribute Libya’s top sovereign positions on a geographical basis.

They rejected the Bouznika agreement that promoted the geographical criterion and established the principle of quotas and regionalization in choosing sovereign positions, stressing that the occupants of these positions must be subject to consensus and agreement in accordance with the standards of competence, integrity, and professionalism.

They protested that establishing the principle of quotas is contrary to the provisions of Article 8 of the 2015 Skhirat Libyan Political Agreement (LPA) which affirms equality between Libyans in the enjoyment of political and civil rights, equal opportunities, and rejection of any discrimination between them.

They said that the adoption of the geographical criterion is a grave breach of the LPA and the amended Transitional Constitutional Declaration (2011), in addition to being a violation of human rights, entrenching discrimination, and destroying the concept of citizenship that brings together all the people of the nation under its umbrella.

They also clarified that the HSC is an advisory authority and does not have the power to enact supra-constitutional standards and provisions, and that the Bouznika agreement issued by some members of the HoR is mere dialogue and does not entail any obligation on the HoR, nor does it have any legal effect.

The objecting HoR members pointed out that Article (15) of the LPA relating to consultations with the HSC referred the consensus mechanism to Annex No. (3) of the agreement, which states that consensus on the part of the HSC is achieved with its approval by an absolute majority of its members. This, they add, is not available in the Bouznika talks and confirms the absence of consensus even on the advisory side, and therefore these outputs are null and void.

They added that the HoR-HSC Bouznika Committee is not authorized to conclude any agreements or understandings regarding the sovereign positions, and that their task is limited to submitting and presenting proposals only, and therefore what was issued by them to develop mechanisms and standards on the positions of sovereignty is considered to exceed their jurisdiction, and is considered null in form and object.