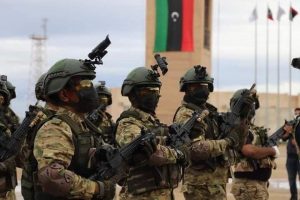 Salahaldeen Al-Namroush, the Minister of Defence of the internationally recognized Libyan government in Tripoli, announced yesterday the completion of training of 1,300 Libyan army personnel under the supervision of the Turkish Armed Forces in training centres inside Libya. This training, he explained, comes within the framework of the military security cooperation memorandum concluded between Libya and Turkey.

The training included specialized programs to raise the level of Libyan army personnel to international standards in 18 different programmes, including the fight against terrorism and mine clearance, he added.

Namroush revealed that about 1,100 trainees are still receiving training in centres inside Libya, while Turkish military academies continue training programmes for part of the students who have dropped out of their studies at the military college that was ‘‘bombed by Emirati drones’’.

The Defence Minister added that about 1000 Libyan soldiers who were trained in Turkish land, sea and air force training centres and schools  have returned to the home, while about 200 are currently continuing training in various fields inside Turkey.

It will be recalled that the 23 October immediate and permanent ceasefire in all parts of Libya agreed by the 5+5 Libyan Joint Military Commission (JMC) during talks in Geneva called for ”the suspension of all training of troops domestically and abroad”.