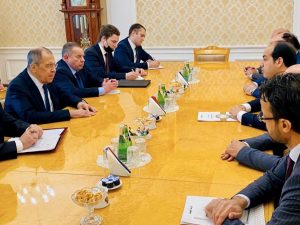 During Friday’s meeting in Moscow by Libya’s Deputy President of the Presidency Council, Ahmed Maetig, with Russian Foreign Minister, Sergey Lavrov, recent development on the Libyan arena were reviewed.

These included the developments of the UNSMIL-brokered Libyan Political Dialogue Forum (LPDF) and the results of the 5 + 5 Joint Military Commission (JMC), the Tripoli government reported. The two parties expressed their support for the 5 + 5 committee for their efforts and urged them to continue holding their meetings for a settlement.

The meeting, which was attended by the Deputy Foreign Minister, the Russian President’s envoy to the Middle East and Africa, Mikhail Bogdanov, also discussed the Libyan government’s programmes to activate its stalled projects and ‘‘hopes that Russian companies will play a major role for these projects’’.

The Russian Foreign Minister expressed his happiness at Maetig’s visit, and expressed his hope for a comprehensive solution, considering that the current time is more than possible to reach solutions and a unified national Libyan government that enjoys regional and international support, and that the international community will only support the solutions that the Libyans accept.

The mention of Russian participation in reactivated Libyan projects is thought to have been an incentive for the Russians to not to obstruct the LPDF process or the 5+5 JMC ceasefire agreement. Russia is accused of supporting Hafter through the Wagner forces along the Sirte-Jufra ceasefire line.

Foreign troops and mercenaries – on both sides – were supposed to leave Libya earlier this month – as stipulated by the 23 October ceasefire agreement.