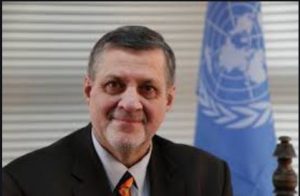 The United Nations Secretary-General António Guterres announced yesterday the appointment of Ján Kubiš (Jan Kubis) of Slovakia as his Special Envoy on Libya and Head of the United Nations Support Mission in Libya (UNSMIL).  This position is established pursuant to Security Council resolution 2542 (2020), the UN reported.

The UN reported that the Secretary-General is grateful for the commitment and outstanding leadership of Acting Special Representative Stephanie T. Williams of the United States in moving the political process forward in Libya.

CBL audit report should be revealed to all Libyans: Stephanie Williams

Williams had been Acting UNSMIL head after the resignation of Ghassan Salame in March last year.