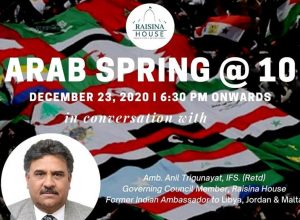 A wasted decade is the story of Libya and apathy of an interventionist but irresponsible international community to put it mildly. Arab Spring that started in Tunisia also called “Jasmine Revolution’ left the failing and falling regimes in its wake. The hapless and more disgruntled people are trying to cope with fractured socio-economic fabric as political stability has become a distant goal. Libya faced the worst due to sheer negligence and lack of planning on the part of those countries that had engineered the UN Resolutions and invoked “R2P’ to militarily intervene against Gaddafi, who had grown rogue over four decades of his autocratic rule.

Although he provided socialist kind of state support and subsidies to normally law-abiding citizens, he failed miserably to create appropriate institutions except his “Green Book” mythology. Hence, after his violent removal the urgent need was to provide support to transition governments in establishing institutions catering to democracy and development by ensuring security and disarming of the unrealistically armed populace.

An unruly Libya was infested by surfeit of arms and ammunitions that were possessed by various armed groups who exercised their suzerainty either on tribal lines or by sheer brute force. More sophisticated arms have been pumped in by various powers over the decade causing greater instability and impudence for the scores of militia groups who derived their sustenance from their foreign benefactors.

The major players were US, UK, France , Russia , Egypt , UAE and Saudi Arabia on the one hand  vs Italy Qatar and Turkey who eventually created the East vs West front  or for that matter Liberals or moderates Vs Islamists . US has been wavering on both sides. Battle lines were drawn and continue till date. Ordinary Libyans continue to suffer especially in these Covid times. Perhaps the oil curse is haunting them.

It is not that Libyans don’t want democracy. In fact, the 2012 elections were exemplary when people were very enthusiastic and held these under extraneous circumstances when there was no security worth the name. However, the western powers and the UNSMIL devised systems so that Muslim Brotherhood’s success in Egypt is not replicated . As such the new leaders, even though idealistic and well-meaning -who descended from abroad, had lost touch with ground reality of 30-40 years and the connect with the enthused street was missing. All the same some semblance of governance began but the scores of powerful militia groups had spawned and had also tasted power.

Another elections of 2014 could not ensure the peaceful transfer of power as the distrust among the political elites grew manifold and hence they moved to the East setting up their House of Representatives (HoR) and Interim Government at Tobruk under the patronage of  Field Marshal General Khalifa Haftar who became the powerful leader of the Libyan National Army and began to call the shots with the help of his international supporters like UAE, Egypt , Russia and France.

He even launched an unsuccessful bid to forcefully take over Tripoli that ensured the forceful entry, overt intervention and near permanent presence of Turkey as a countervailing force on behalf of Tripoli based Government changing the regional dynamic yet again. Tripoli government which eventually became internationally recognised and GNA in the west continued to rule with the support of Islamists and Turkey, Italy, and Qatar. But the fundamental issues remain, and power ambitions of both sides are paramount.

In this fight between East and West the neglected southern part of Libya became a football and field for extremist groups also in liaison and in tandem with terrorist groups in the Sahel region. In Libya’s south tribal groups like Tebu, Tuareg and Arab armed groups fought for control of territory and resources in Southern Fezzan . Militia groups held the oil facilities shut or hostage at will disrupted the economy and public services and continued to cause worries to the Libyans and Europeans alike in this oil rich country.

Backtracking from Syria and Iraq the ISIS and Al Qaeda became much stronger in Libya and found a fertile refuge in the deteriorating conditions. This also became fight between Operation Dawn and Operation Dignity that only led to more bloodshed and instability.

It is not that the peace efforts have not been made by many parties including an excellent work done by UNSMIL  to bring the warring parties to the table on several occasions despite a very difficult political terrain , Actually the Skhirat Agreement of December 17 ,2015 was a good starting point that brought the two sides together raising hopes for better social, economic, security and political lives in Libya. 2011 Constitution was amended and updated and even efforts were made to hold elections in 2018 and 2019.

But the ambitions of the leaders of the two sides came in the way. How will these be reconciled and keeping a united Libya will require genuine concessions and accommodation by all sides and none should feel slighted or disadvantaged. Otherwise, the prospect of a divided Libya is quite real. All the external benefactors of various groups will have to stop patronising violence and separatist tendencies and arming their tutelage which is a tall order given the ground situation. Even a confederation with equal participation and more autonomy to the three regions in East, West and South on some already available politico-economic models may have to be explored if the unity government ruling a united Libya does not remain a viable reality.

Today, despite serious challenges we are witnessing hopeful signs for the Libyan Peace Process.  Germany and Russia had taken the lead with UNSMIL and other major players to call for the Berlin Process in January 2020 .The negotiations succeeded  after parties to the conflict—Libyan National Army (LNA) under Khalifa Haftar, and the UN-recognised Government of National Accord (GNA), based in Tripoli—agreed to the long and winding 55 paras of recommendation under the Berlin process. . An International Follow-Up Committee (IFC) was set up to monitor the peace process and to establish tracks concerning military, political and economic agendas.

The meetings between 5+5 Joint Military Committee delegations—Prime Minister Fayez Al Serraj (GNA) and Speaker of the House of Representatives Aguila Saleh (LNA)—resulted in ceasefire extension and the lifting of eight months of oil blockade.  Several meetings later it was agreed to hold Presidential and Parliamentary elections based on an agreed constitutional framework. This also led to the resumption of the inclusive Political Dialogue Forum under the aegis of UNSMIL. On October 23 , a permanent ceasefire was signed by the representatives of the 5+5 Joint Military Committee which is holding out despite occasional frictions. But it remains tenuous and can break out any time as both sides are continuing to arm themselves even more.

Also, the Libyan Political Dialogue Forum (LPDF) was launched in Tunis in November and has meet physically and virtually. The 75-delegates conference agreed on the roadmap to “credible, inclusive and democratic national elections,” to be held on December 24, 2021. So far, there has been no consensus on the transitional government’s details or a unified executive authority that would be capable of organising the free and fair elections, as per the agreed constitutional framework. EU had worked out plans to enforce UN Arms embargo and even to deploy European Military observers.

Hopefully, they would not be working on ensuring EU ‘s geo-political interests over the real needs of stability and development of Libyans themselves.  Even UNSG Guterres ,on January 12, reiterated “A lasting ceasefire needs support from regional and international stakeholders. All member states of the Security Council must abide by the arms embargo on Libya as well as other resolutions.” So especially important and underlies the suspicions and hesitations of rival powers embedded in the Libyan conflict.

On January 15, 2021 Fadel Lamen , Director General , National Economic and Social Board tweeted “ Country is collapsing .The situation is bleak. Corona is spreading like fire and health and education systems are collapsing daily those in power are busy undermining any success for the UN led LPDF”.  Time has come when dreams of ordinary Libyans for a “New Libya’ should come true for which the responsibility equally rests on foreign actors and interlocutors and the Libyan interim leadership.

Retired Ambassador Anil Trigunayat was a member of the Indian Foreign Service. He has served in the Indian Missions in Cote d’Ivoire, Bangladesh, Mongolia, USA, Russia, Sweden Nigeria, Libya and Jordan.