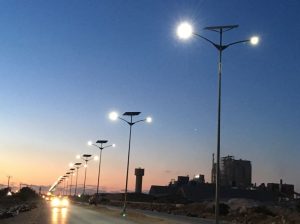 A Benghazi road with solar lighting implemented by the UNDP (Photo: UNDP Libya).

Further to earlier news that Egypt is planning a rail link to Benghazi, it has now emerged that it is also planning a new African link road through Libya, the eastern based official state news agency LANA reports today.

The revelation was made by Egyptian Minister of Transport, Kamel Al-Wazir, who said that there is a plan to implement a link between Egypt and the neighbouring countries, adding: “The land road connects 9 African countries, including Sudan.”

The Minister of Transport made the revelation during a plenary session of the Egyptian House of Representatives in Cairo, where he stated that the development of the road and railways aims to create a road from Salloum to Benghazi, explaining that this supports Egyptian industry and labour, and that this contributes to the transport of goods to Libya.

The Minister of Transport added, “There was coordination with Chad regarding whether the route passes from Sudan or Libya, and a decision has been made to start from Libya, then Chad, and then Congo.”

He added that the railway projects in Egypt are witnessing a qualitative leap to advance them, explaining that the development of the railway system comes in parallel with the establishment of the fast electric train, adding that “the latest systems that are used in the railways aim to achieve safety and avoid human errors.”

It will be recalled that there are plans for the construction of Libya’s coastal motorway stretching from the Tunisian to the Egyptian border. The motorway will be financed by the Italian government and built by Italian companies.

Italy will pay for the project as per the 2008 agreement signed between Qaddafi and Berlusconi as part of Italy’s colonial era compensation to Libya.

The announcement of the Egypt-Benghazi rail link was first made by Transport Minister Al-Wazir during a Cairo press conference in November last year.

The Benghazi line is part of the Egyptian government’s larger plans to develop its rail transport network which includes a link to Sudan.

Analysts see Egypt’s intention to build a rail link to Benghazi as an attempt not only to improve economic links, but also an attempt to cement its current political links with eastern Libya.

It will be recalled that in the war on Tripoli (April 2019 – June 2020), Egypt supported the eastern-based Khalifa Hafter. Hafter failed to take Tripoli and his forces were pushed back to Sirte.

It will be recalled that Libya’s railway project, running across the coast and down south to Sebha, has been stalled since the 2011 revolution with the lack of funds and insecurity preventing foreign contractors from resuming their work, despite a number of announcements to the contrary.

Libya’s US $12 billion rail project was split between Russian Railways (RZhD), tasked in 2008 with building the 554-km line between Sirte and Benghazi, and the China Railway Construction Corporation (CRCC).

The Chinese were awarded a contract in 2008 to build the line from Sirte to Khoms and then on to the Tunisian border at Ras Jedir.  The Chinese also won the contract to build the 800-kilometre line between Misrata and Wadi Shatti near Sebha. Both started on their projects but were forced to stop work with the advent of the 2011 revolution.