Ageela Saleh’s virtual hustings: War on Tripoli was a mistake, time to turn over the page 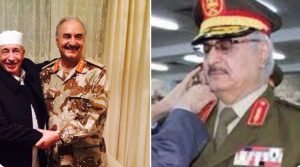 Ageela Saleh received much criticism on social media for calling the war on Tripoli a mere mistake (Photo: Social media).

At yesterday’s virtual hustings by the 24 candidates for Libya’s three Presidency Council positions, Ageela Saleh, head of the internationally recognized Libyan parliament, the eastern based House of Representatives, received more attention for two phrases than the rest of the candidates’ often eloquent presentations.

Asked about the war on Tripoli waged by Khalifa Hafter and his aligned forces who Saleh appointed and supported, Saleh said that nobody is infallible, and it was time to turn the page and move on.

As is probably expected in this day and age, social media had a field day. The Arabic hashtag ‘‘Ageela’s mistake’’ (#غلطة_عقيلة) went into overdrive. People were incensed that Saleh saw the war as no more than a mere ‘‘mistake’’ considering the cost of life and infrastructure it caused.

Photos of the 40 dead cadets at the military academy massacre, graves of war dead and mass graves in Tarhuna, of the war injured, war maimed, displaced and boobytraps, destroyed homes and buildings – filled social media.

They lay the blame fully at the feet of Saleh for legally appointing and empowering Khalifa Hafter for attacks on civilians. They felt Saleh should be up for trial on war crimes – not for selection for the leadership of Libya.

And judging him on his track record, commentators say Saleh has done nothing to move Libya forward. He had failed miserably and should not be rewarded for his failure.

Many saw the possibility of the election of Saleh as the death knell of the possibility of social justice and long-term stability of Libya. Many found it difficult to imagine Saleh arriving, living and working freely in Tripoli – after spending 14 months trying to destroy it and annihilate its civilians.

Even easterners waded in, noting that their sons, brothers, fathers, and friends had died not for a matter of principle, but for a ‘‘mistake’’. Others wondered how Saleh could be trusted in another leadership position if he is prone to such gargantuan mistakes: a deadly civil war.

Saleh’s backtracking on the war indicates that it was never a war over principles, philosophy, or justice – but over pure desire for power. It undermines the whole Karama/dignity movement in eastern Libya.

Saleh is in danger of alienating himself in both western and eastern Libya. However, the realpolitik of the LPDF selection system is such that Saleh is favourite to win on a list system with his erstwhile enemies.