LPDF must prioritise human rights, justice and accountability: Lawyers for Justice in Libya 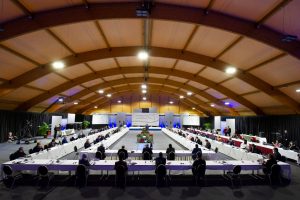 LFJL has called on the 74-member LPDF  gathered in Geneva 1-5 February to use criteria of human rights, justice and accountability key in their selection of Libya’s next unified government (Photo: UNSMIL).

Ahead of voting in Geneva today on the candidates for Libya’s new unified government that will lead Libya towards national elections on 24 December 2021, NGO Lawyers for Justice in Libya (LFJL) called on the members of the Libyan Political Dialogue Forum (LPDF) to make human rights, justice and accountability key priorities when selecting the members of the Presidency Council and the Prime Minister.

On 30 January 2021, the United Nations Support Mission in Libya (UNSMIL) published the list of candidates for the Presidency Council and Prime Minister positions. The Presidency Council and Prime Minister are tasked with implementing a Roadmap agreed by the LPDF members towards holding national elections on 24 December 2021. The members of the LPDF will select the candidates for the respective positions later this week.

Following consultation with its partners in Libya,] LFJL recalled key priorities to ensure that the LPDF members only select candidates who can credibly demonstrate that they are suited to uphold their commitment to prepare the groundwork towards the holding of fair, safe and free elections by 24 December 2021. These should be inclusive of women, internally displaced persons, Libyans outside the country, minorities including political and ethnic minorities as well as those with disabilities.

Beyond preparing the country for elections by 24 December 2021, candidates should also demonstrate how they will facilitate the work of the new government after that date to turn Libya into a country respectful of human rights and the rule of law. In LFJL’s view, this automatically excludes any candidate against whom there are credible allegations of involvement in financial crimes, such as corruption or money laundering, serious international crimes, or any human rights violation. By not selecting any such candidate, the LPDF will underline that Libya’s future must not be decided or influenced by those allegedly responsible for such crimes. Instead, the LPDF can use this opportunity to contribute and ensure that Libya’s future is one that is based on human rights, justice and rule of law.

Considering thousands of accounts of human rights violations in Libya and a pervasive culture of impunity, candidates should prioritise accountability and identify what measures they will take to address these violations in the interim, and what they will put in place for the future government to build on. This is particularly true regarding crimes and violations committed against people in Libya on a daily basis by different armed groups and militias, including those militias that were integrated into the different security apparatuses of the State. The interim government should prepare for the disarming of armed groups and militias and establish a vetting system to exclude those from public office who have, or are alleged to have, committed serious human rights abuses. Due to the absence of a functioning, independent judiciary and the impunity enjoyed by perpetrators, such a vetting system should take into consideration credible allegations, and not only convictions, of serious international crimes and human rights violations.

Another, related, serious concern is the continued attacks on civil society through the adoption of repressive decrees and other measures by the existing authorities in Libya. LFJL believes that these repressive measures – such as requiring NGOs to obtain governmental permission to do their work – have been put in place solely to hinder the activities of civil society organisations. Candidates for the interim government should commit to removing these restrictions, which are in contravention of Libya’s international obligations, and make it a priority of their interim government to protect civil society and human rights defenders.

4-Candidates should commit to full cooperation to fight impunity

Candidates should also commit to fully cooperate with, and support the work of, the various mechanisms and authorities investigating human rights violations and violations of international humanitarian law and international criminal law in Libya, including the International Criminal Court, the Independent Fact-Finding Mission on Libya and any investigations carried out by authorities of third countries on the basis of extra-territorial jurisdiction.

In particular, candidates tasked with the implementation of transitional justice elements within the Roadmap, should demonstrate how they plan on ensuring that issues such as criminal accountability, truth, reparations, and justice as well security sector reform will be addressed. The interim executive authorities can helpfully lay the groundwork towards ensuring that victims have access to truth and justice, and that measures such as amnesties or pardons will not be used to allow perpetrators of serious international crimes and grave human rights violations to benefit from impunity.