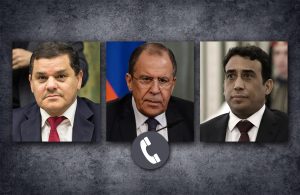 The Russian Foreign Ministry said, in a statement, that Lavrov made two phone calls Monday with Menfi and Aldabaiba, congratulating them on assuming the positions of President of the Presidency Council and Head of Government.

Lavrov pointed out that Moscow was one of the first capitals that welcomed the results of the new executive authority elections in Libya, stressing that it had before it the implementation of difficult tasks, and wished it success in this work.

Lavrov stressed, according to the ministry, “Russia’s readiness to constructively work with the transitional administration in Libya, with the aim of quickly overcoming the crisis that has gripped the country for a long time.”

The Foreign Minister also stressed his country’s keenness to enhance cooperation between the two parties in the interest of continuing to develop Russian-Libyan relations, which have traditionally been friendly in nature.

It reported that for their part, Menfi and Aldabaiba praised the position adopted by Russia throughout the crisis in the country, noting the constructive and active role of Moscow in passing the settlement process based on the principle of involving representatives of all historical regions and Libyan political forces.