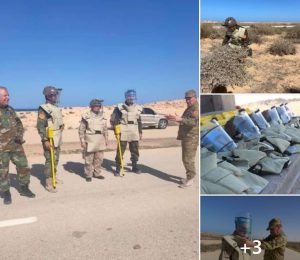 Demining started on the Sirte Misrata coastal road as part of the ceasefire agreement (Burkan.ly).

Military engineering teams began to clear mines and war remnants from the coastal road linking Sirte – Misrata, in implementation of the decision of the 5+5 Joint Military Commission (JMC). This comes as part of the 23 October 2020 ceasefire agreement.

Both opposing Libyan parties were engaged in their own demining process on their side of the ceasefire line in preparation for the opening of the coastal road. The road had been closed during the Khalifa Hafter war on Tripoli from April 2019 to June 2020.

The JMC’s sub-committee for clearing contact lines will begin re-stationing forces after completing the demining process in the specified area.

The JMC affirmed at its latest Sirte meeting the implementation of the terms and provisions of the October ceasefire agreement, insisting on moving forward with the process of removing mercenaries and foreign fighters immediately. It also reiterating its request to the Security Council to follow up the outcomes of the Berlin Conference to oblige states affiliated with foreign fighters and mercenaries to withdraw them immediately from Libyan territory.

The JMC has also agreed to develop a plan to implement the retreat of forces from contact sites in Sirte and Jufra and return them to their original locations.

Yesterday an inaugural Libyan Airlines flight between Tripoli and Benghazi materialized, the first since the end of the west-east war – also part of the ceasefire agreement.

5+5 JMC calls on UNSC to oblige members to remove mercenaries and foreign fighters from Libya, demining to start from 10 February | (libyaherald.com)

UNSMIL welcomes 7th round of 5+5 JMC talks in Sirte | (libyaherald.com)