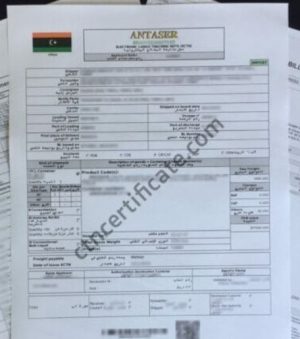 Libya’s Chambers of Commerce are calling on the Finance Ministry for the postponement or cancellation of the use of the ECTN due to blockages of goods at ports (Photo: ctncertificate.com)

The Libya General Union of Chambers of Commerce, representing all of Libya’s chambers, as well as the Shipping Chamber have called on the Tripoli Finance Ministry to postpone or cancel the implementation of the Electronic Cargo Tracking Note (ECTN).

As reported by Libya Herald previously, the use of the ECTN had been introduced at the start of February this year by the Customs Authority, a department of the Finance Ministry.

Besides objecting to the fact that the Finance Ministry had, according to them, introduced the use of the system without prior consultation with the main stakeholders, they claim that the ECTN had led to bottlenecks at Libya’s ports delaying the release of goods.

They called for either the postponement of the introduction of the ECTN as a temporary solution to problem of logjams of goods at ports, while reviewing the ECTN’s introduction, or cancelling it all together. This was especially the case for the delay in release of perishable and sensitive goods such as medicines.

The Chambers proposed the use of the Automated System for Customs Data (ASYCUDA) system instead of the ECTN.

The Automated System for Customs Data World (ASYCUDA) is a computerized system designed by the United Nations Conference on Trade and Development (UNCTAD) to administer a country’s customs. It is the largest technical cooperation programme of the UNCTAD, covering over 80 countries and 4 regional projects.

UNCTAD’s aim was to build a computer system to assist customs authorities (or their local equivalents) all over the world to automate and control their core processes and obtain timely, accurate and valuable information to support government projections and planning.