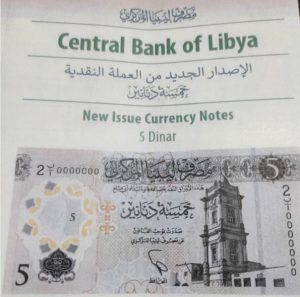 The Tripoli Central Bank of Libya issued a new five-dinar currency note this morning at a launch event at a hotel in Tripoli.

Its launch is to coincide with the occasion of the tenth anniversary of the February 17 2011 Revolution.

The new banknote issue comes within the framework of the CBL’s efforts to develop the local currency, and the shift from printing banknotes from regular linen paper to printing on polymer paper, the CBL explained. It explained that it comes as part of its gradual transformation plan that started with the issue of the new one dinar denomination that entered circulation two years ago.

It revealed that it plans to similarly replace the ten, twenty and fifty dinar denominations during the coming period.

It will be recalled that in February 2013, the Tripoli CBL had also issued new one, ten, twenty and fifty dinar notes on the anniversary of the 17 February revolution. The total value of the new banknotes was understood to be LD 116 billion.

The new banknotes had been modernised and improved allowing blind people to identify their financial value by touch. The new notes were meant to help reduce forgeries because of features such as security tags and the use of four colours.

The plan was that once the new banknotes had been fully issued, there would have been a phased withdrawal of the old ones. However, the political and economic deterioration that Libya went through in the ensuing years and consequent cash crisis meant old issues were kept in circulation and even those collected by the CBL were recirculated in the market.

Equally, as Libya and its Central Banks separated politically, the eastern CBL printed its own notes. In June 2016 it introduced LD 200 million of new notes printed in Russia.