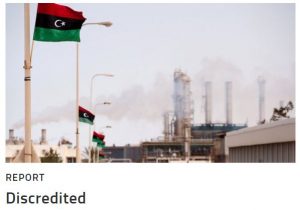 A new report out today by international NGO, Global Witness, says Libya appears to be losing millions of dollars a year through fraudulent use of its Letters of Credit (LC) system, run by the Tripoli Central Bank of Libya.

The report says these deals are passing through correspondent banks in the heart of the City of London, with weaknesses in anti-money laundering rules leaving the UK’s banking system wide open to financial crime.

Letters of Credit channel Libya’s oil dollars to fund the imports on which the country relies. They provide the only official pipeline of foreign currency for Libyan businesses and public authorities to buy food, medicine, equipment and services from overseas. Yet the system has been widely abused since the 2011 revolution by powerful interests in Libya, including armed groups, business figures and political actors on all sides of the country’s political divides.

Drawing on financial disclosures published on Facebook by the Central Bank of Libya, Global Witness has created a searchable database of nearly $2.5bn worth of LCs issued over 13 weeks between April and July 2020.

“Our investigation and ground-breaking database sheds new light on the flow of funds from Libya’s Letters of Credit system, revealing the scale of the fraud and following the money trail from Libya to London and beyond,” said Colin Tinto, Senior Consultant Adviser at Global Witness.

Using this newly created database, as well as source interviews with businessmen and former government officials and a wide range of public and confidential material, Global Witness’s report, Discredited, claims that:

The report says the revelations come as Libya is at a crossroads, with a tentative ceasefire in place, attempts to form a new government underway and national elections scheduled for 24 December this year. Having developed outsized influence over public spending, Libya’s Central Bank finds itself at the heart of an institutional power struggle over the country’s foreign currency accounts and access to oil and gas revenues.

“It is clear that Libya’s letters of credit system has been abused on a huge scale, and it is the Libyan public who are picking up the tab,” said Tinto.

Beyond Libya, the revelations also highlight a growing global tension between central bank independence and oversight. From capital and exchange controls to financial sector bailouts following the 2008 crash, central banks are increasingly acting as conduits for direct handouts of cash in support of national economies. This trend has accelerated significantly during the COVID-19 pandemic in many countries. Yet the oversight and accountability mechanisms for central banks have not caught up with this rapid expansion in their role, the report says.

“As their balance sheets balloon and their remits widen, central banks worldwide are putting ever greater amounts of public money into private hands,” said Tinto. “Citizens are entitled to greater accountability and transparency from central banks to ensure they know how state funds are being spent,” he added.

The report also raises questions about the “due diligence” standards expected of London correspondent banks, which shuttle vast sums of money across borders. However, loopholes in the UK’s anti-money laundering and counter-terrorist finance rules – particularly around bank ownership – leave little confidence the system would reliably filter out LCs that are fraudulent, used for money laundering or connected to armed groups.

“Correspondent banking has long been seen as a weak point in international anti-money laundering and counter-terrorist finance defences, including in the UK. If the UK government is serious about stopping the proceeds of money laundering, conflict finance and organised crime flowing into the City, they must take action to strengthen the due diligence standards in London’s correspondent banks,” said Tinto.

Global Witness is also calling on public authorities across Libya to put financial transparency at the heart of the peace dialogue, starting with foreign exchange disbursement systems such as LCs. This will be essential for helping build trust in public institutions as Libya stands at a pivotal moment politically and economically.

“We are publishing our open source database in the hope that Libyan law enforcement, journalists and citizens can use it to track where public money is going so that there is greater accountability in the Letters of Credit system,” said Tinto.

“The Central Bank of Libya’s letter of credit disclosures to date are a positive step. The Central Bank and Libya’s governing authorities should build on this by publishing LC data according to open data principles, publishing public sector LCs and showing the end destination of all LC money, which is crucial for cracking down on illicit financial flows,” concluded Tinto.