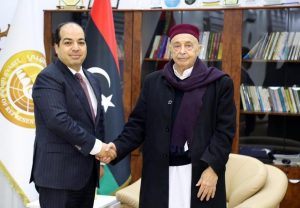 Maetig said the meeting was ‘‘In the framework of the work to establish a unified budget and end the state of financial division of the state’’.

Adding, ‘‘This step is important in paving the way for the next government (GNU) to take over its functions with a unified budget and unified institutions’’, he concluded.

He was accompanied by Tripoli’s Economy and Acting Finance Minister, Faraj Bumtari and Deputy Finance Minister for eastern Libyan government, Mrajaa Ghait was also present at the meeting.

The meeting comes as a continuation of the first Brega Budget Reunification meeting on 12 January this year.