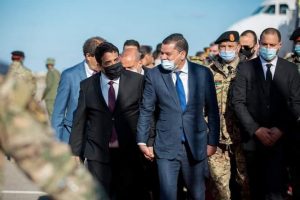 The head of the Libyan Presidency Council designate, Mohamed Al-Menfi, discussed in Tripoli Saturday with the Chief of General Staff of the Libyan Army of the Government of National Accord, Lieutenant General Mohamed Al-Haddad, the means of unifying the military establishment in the country.

Menfi’s Media Office said this comes within the framework of Menfi’s endeavour to unify the military establishment in the country through the 5 + 5 Libyan Joint Military Committee to achieve stability in Libya.

The meeting discussed some of the obstacles that the General Staff is going through in Tripoli and ways to unify the military institution and support the joint 5 + 5 JMC.

The Media Office also reported that Menfi met with some of the ‘‘military leaders’’ in Tripoli. It did not clarify if these were militia leaders or other commanders in the official western-based Libyan army.