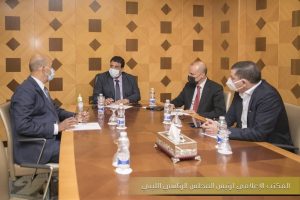 The designated head of the Presidential Council, Mohamed Al-Menfi, accompanied by the members of the Presidency Council, Musa Al-Koni and Abdulla Al-Lafi, met with designate prime minister of the Government of National Unity (GNU), Abd Alhamid Aldabaiba in Tripoli yesterday.

Menfi’s Media Department reported that they discussed the latest regarding the formation of the GNU and the efforts of the prime minister to gain the confidence for his government from the Libyan House of Representatives (HoR) in the HoR session planned to be held in the coming days, so that the government can begin its work.

In a separate meeting yesterday, they met members of the 5 + 5 Joint Military Commission. Menfi’s Media Department reported that they discussed ‘‘ways to unify the military establishment’’.