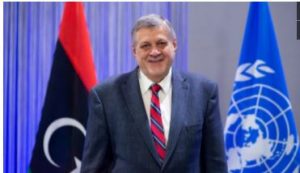 Over the past two days, Special Envoy for Libya and Head of UNSML Jan Kubis continued his introductory calls with Libyan interlocutors, UNSMIL reported yesterday.

He acknowledged their work to achieve progress in political, economic, and security files, and thanked them for their active participation in the Libyan Political Dialogue Forum (LPDF).

UNSMIL reported Kubis sought their views on the next steps to ensure the swift formation of the new interim government (Government of National Unity – GNU), and further advances in the economic, social, and security areas, in creating unified structures and authorities, in moving forward on national reconciliation, as well as on  implementation of the Roadmap with a view to holding national elections on 24 December 2021.

The UNSMIL head also spoke to Khalifa Haftar to discuss developments and priorities, in particular in the security file, where he welcomed his support for the implementation of the 23 October ceasefire.

He also had consultations with Political Envoys/representatives of France and Italy, and Permanent Representatives (PR) to the UN in New York of Libya, Algeria, Egypt, Tunisia, Turkey, France, UK, and PRs to the UN in Geneva of Libya and Switzerland, as well as with Libya Ambassador to Switzerland.