After backlash, Aldabaiba backtracks in his stance on presence and role of women in his government 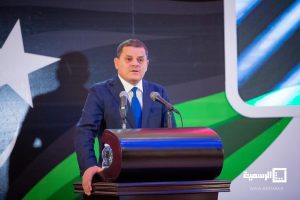 Abd Alhamid Aldabaiba prime minister designate of the Government of National Unity was forced to backtrack on his comments on women at last Thursday’s press conference (Photo: Alrasmia TV).

The prime minister designate of the Government of National Unity, Abd Alhamid Aldabaiba, ‘‘renewed his commitment to the presence of women in his government with effectiveness and real powers in them, not as a mere number without a real role’’.

This statement reportedly came during the discussion that took place Saturday, between Aldabaiba and the members of the Libyan Political Dialogue Forum (LPDF), about the composition of the GNU and the challenges facing it in this regard, as well as the role of women in this formation, according to the Media Office of the GNU.

It will be recalled that Aldabaiba had come in for much social media criticism after, in response to a question from the media at Thursday’s (25 February) Tripoli press conference, he had said that there were no women put forward by the regions for his intended cabinet.

He then went on to compound this political blunder by spouting off stereotypical and condescending phrases associated with patriarchy apologists such as women are our ‘‘mother, sister, daughter” etc.

This led to a social media backlash in which women said they wanted to be his equal not his relative. The backlash forced Aldabaiba to hold a virtual meeting with the female members of the Libyan Political Dialogue Forum (LPDF).

It will be recalled that if the House of Representatives fails to hold a unified session with a quorum and fails to pass a vote of confidence in the GNU, it will be up to the LPDF to pass that vote of confidence. Therefore, Aldabaiba will need to keep on good terms with the female members of the 74-member LPDF.

Moreover, the LPDF had stipulated in its Roadmap that the GNU allocates 30 percent of its positions to females. By admitting that he was unlikely to appoint any females in his cabinet because the (male-dominated) voting districts had not nominated any females, Aldabaiba was already breaking the Roadmap commitments.

With his backtracking statement above, it seems he will be appointing women in roles ‘‘with effectiveness and real powers in them, not as a mere number without a real role’’.