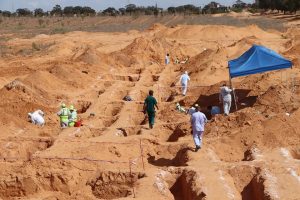 Libya’s Tripoli based Public Prosecutor’s Office issued, on Saturday, domestic and international arrest warrants against those accused of being responsible for the mass graves in the city of Tarhuna, with their names circulated to all the arresting authorities.

The Tripoli based official state news agency, LANA, reported that the Public Prosecutor mandated the Public Authority for Search and Identification of Missing Persons to undertake the process of exploration and exhumation of the bodies from the graves and transfer them to the Forensic Medicine Department of the Judicial Expertise Centre at the Ministry of Justice, to undertake the autopsy of those bodies and prepare detailed reports on each body, indicating the cause of death, time and tool causing it.

This came in a statement issued by the Attorney General’s office regarding the investigations it is conducting about the mass graves that were found in Tarhuna and the accompanying procedures regarding the identification of the bodies extracted from them.

It is noteworthy that the Attorney General had issued, in July 2020, an arrest warrant that included 100 people accused of involvement in the case of mass graves that were found in the city of Tarhuna and its environs after Haftar’s forces withdrew from it in June of last year.