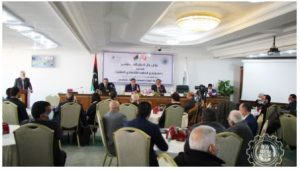 The Libyan-Tunisian Businessmen Forum was held at the headquarters of the Tripoli Chamber of Commerce, in Tripoli yesterday, under the slogan “Supporting and strengthening joint economic cooperation.”

The Tunisian delegation from Sfax Chamber of Commerce will visit for three days. At yesterday’s session, delegates reviewed the consolidation of cooperation and partnership between the two chambers and the increase of trade, industrial and investment exchange between them.

In his speech, the head of the Tripoli Chamber, Mohamed Gaddah, welcomed the Libyan and Tunisian businessmen meeting to enhance cooperation in economic fields between the two countries.

For his part, the head of the Sfax Chamber of Commerce and Industry, Rida Fourati, explained the spirit of cooperation and brotherhood between the two countries, pointing out that the Tunisian delegation includes several young people in the city of Sfax representing Tunisian companies in industrial and craft fields.

It is noteworthy that this visit took place in coordination with the two Chambers to follow up on the agreements signed between the two in various economic fields.

The forum also touched upon some problems in Libyan and Tunisian commercial laws that limit the level of cooperation and ways to solve them, overcome difficulties in the border area and tighten control over it to control the exit and entry of goods in a manner that does not conflict with the law in the two countries.

The Tripoli Chamber reported that the visiting Tunisian delegation, which includes several businessmen active in various fields in Tunisia, brought with it messages from the Tunisian government to support the Libyan development programme that Tunisian companies will undertake in the field of construction and completion of stalled housing units. Part of this delegation had arrived in Tripoli last Saturday on a working visit to Libya during which they will hold talks with Libyan officials focusing on economic cooperation, and make field visits to a number of factories and major commercial centres in Tripoli.