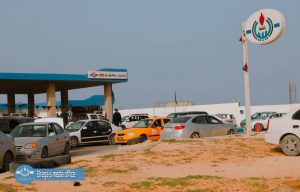 Brega says there is plenty of fuel in stock (Photo: Brega Marketing).

Brega Marketing Company, a wholly owned National Oil Corporation subsidiary, said yesterday that there is no justification for queues at petrol stations as it holds ample stocks of petrol.

Brega is responsible for the import / domestic distribution of fuels, domestic cooking gas and lubricants.

It was referring to the sudden formation of queues at Tripoli petrol stations yesterday as a rumour started circulating that there is a petrol shortage.

Brega called on the public to be responsible and not to listen to unfounded rumours that there is a fuel shortage.

It blamed the short-term shortage on security authorities preventing it from distributing fuel during rush hours. This restriction has now been lifted it says.

It added that fuel tankers are arriving and unloading at ports normally. Today it was expecting 40 million litres to be unloaded at ports.