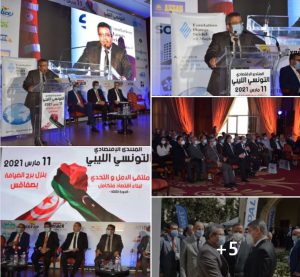 Speaking at the Tunisian-Libyan Economic Forum in Sfax (11 March), Libya’s outgoing Minister of Labour, Al-Mehdi Al-Amin, emphasized the depth of Libyan-Tunisian relations and the joint ties between the two countries in all fields, whether in the political, cultural, social or economic fields.

In one of his last official duties before Monday’s official oath ceremony of the new incoming government, the Minister stressed the need for the revitalization and continuation of commercial relations between the two countries, especially with regard to:

For his part, Tunisia’s Minister for Housing and Infrastructure, Kamel Eddoukh said during a workshop devoted to the issue of reconstruction, joint construction, development of the public works sector, roads, and the opening of gates to sub-Saharan Africa, Eddoukh said the forum opens investment opportunities to both countries.

He stressed the importance of the forum in advancing economic relations between Tunisia and Libya, noting that the experience of Tunisian competencies and enterprises will be invested in the good reconstruction of Libya and support cooperation between the two countries in a number of sectors, such as the public works sector.

He indicated that this meeting represents an open field for exploring investment opportunities in African countries for Tunisian and Libyan businessmen and investors.