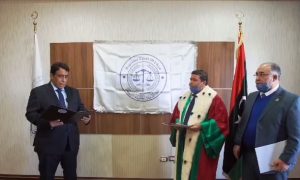 The new three-member Presidency Council took the constitutional oath this morning before the Constitutional Court at its Tripoli headquarters.

They then headed to Tobruk to attend the Government of National Unity’s constitutional oath-swearing ceremony before the House of Representatives (HoR).

The LPDF was created by UNSMIL to break the political impasse reached in the implementation of the LPA.

Legal experts still feel that there needs to be a constitutional amendment by the HoR and High State Council to the LPA to incorporate the new three as opposed to the old nine-member Presidency Council.