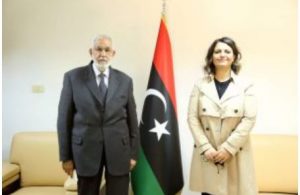 Libya’s first ever female Foreign Minister, Najla Mangoush, took over her duties from her predecessor, Mohamed Siala, at a ceremony in the Ministry in the capital Tripoli yesterday.

The historic occasion did not pass unnoticed by the Foreign Ministry which described it thus: ‘‘In a cultural scene that embodies the peaceful handover of power and in a historical precedent represented in the assumption of the first woman in the history of Libya the duties of the Minister of Foreign Affairs and International Cooperation.’’