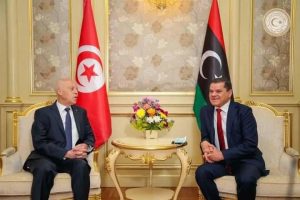 Tunisian President, Kais Saied, made a historic official one-day visit to Libya yesterday. It was the first visit of a head of state to Libya since 2012 and the first to be received by the newly sworn-in Libyan Government of National Unity.

Saied was accompanied by a high-level delegation, including Tunisian Minister of Foreign Affairs, Immigration and Tunisians Abroad, Othman Al-Jarandi, and a number of advisors and members of the Office of the President of the Republic of Tunisia.

A joint statement on Saied’s visit stated that ‘‘this fraternal visit reflects the common desire to enhance consultation and coordination between the leaderships of the two countries to establish visions and perceptions that enhance the distinguished path of cooperation existing between Libya and Tunisia and establish a solid partnership that meets the aspirations of the two brotherly peoples for stability and development’’.

Presidency Council head Menfi and Prime Minister of the Government of National Unity, Abd Alhamid Aldabaib, held in-depth discussions with Saied, during which they emphasized the strength of the historical ties between the two countries and that the future of relations between them will be as long as these ties are. The importance of the role that the Tunisian Republic plays in supporting the democratic path in Libya, recalling in this regard Tunisia’s hosting of the Libyan Political Dialogue Forum, which culminated in the selection of the new executive authority of the State of Libya was also discussed.

The upcoming entitlements of both countries, especially at the developmental and economic level, were the most prominent axes of the talks, as it was agreed on the importance of expediting the holding of the joint supreme committee meetings to strengthen the mechanisms and frameworks for bilateral cooperation in various fields, as the next meeting of the committee is to be held in the Libyan capital, Tripoli.

The two sides stressed the need to work to facilitate transit and movement procedures for citizens, the flow of goods and goods, encourage investment, intensify the pattern of trade exchange between the two countries, and work to overcome difficulties in this regard, in addition to the importance of Tunisian airlines resuming their flights to Libya.

The talks also dealt with the issue of the disappearance of Tunisian journalists, Sofiane Chourabi and Nazir Qattari, as it was emphasized that efforts should be redoubled to find out the truth about their disappearance.

The two sides discussed regional and international issues of common interest, as the importance of coordinating positions on them was emphasized by intensifying consultative meetings, and they stressed the need to activate the mechanisms of the Arab Maghreb Union, and to expedite its meetings at the level of foreign ministers and at the summit level.

In conclusion, the two sides affirmed the importance of continuing strategic cooperation and continuous communication to strengthen ties of brotherhood and joint cooperation in a way that contributes to achieving development and stability in the two countries in the interest of the two brotherly peoples.