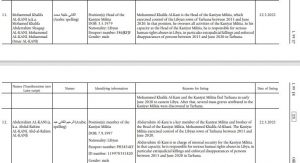 The European Union yesterday imposed sanctions on two leaders of the Kani/Kaniyat Militia from Tarhuna.

The two are brothers Mohamed Khalifa al-Kani, and Abdul Rahim al-Kani. They were sanctioned on the grounds of human rights violations, including committing extrajudicial killings and enforced disappearances between 2015 and June 2020 in the city of Tarhuna.

The brothers took over control of the city by brutally suppressing and at times murdering their opponents. Initially they were aligned to the internationally recognized Libyan government in Tripoli, however, they switched to side with Khalifa Hafter in 2019 when Hafter launched his war on Tripoli.

They continued to brutally control Tarhuna until they and Hafter were pushed out of western Libya to the central Libyan city of Sirte in June 2020. They are reported to have fled to eastern Libya.

Upon its liberation from Hafter numerous mass graves have been discovered in Tarhuna which have been attributed to the deeds of the Kani brothers.

It will be recalled that the U.S had also imposed sanctions on Mohamed al-Kani and the Kaniyat militia for human rights abuses on 25 November 2020.

It had announced that Mohamed al-Kani and the Kaniyat militia was responsible for the murder of civilians recently discovered in numerous mass graves in Tarhuna, as well as torture, forced disappearances, and displacement of civilians.

It had said that Al-Kani and the Kaniyat militia are designated pursuant to Executive Order (E.O.) 13818, which builds upon and implements the Global Magnitsky Human Rights Accountability Act, and targets serious human rights abuse and corruption around the world.