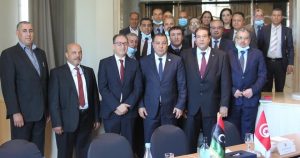 Libya and Tunisia yesterday agreed to reactivate the Ras Ajdir Unified Customs Window agreement as part of the further strengthening of bilateral Tunisian-Libyan cooperation in the customs field.

The agreement was reactivated at a meeting was held in Djerba between the Libyan Customs Authority, their Tunisian counterparts, and the Tunisian ambassador to Tripoli.

The agreement aims to find solutions to many problems related to the flow of goods and passengers between the two countries and the facilitation of bilateral procedures at the border crossing.

At the meeting it was confirmed that due to the accumulation of goods in the Port of Ras Ajdir and the importance of facilitating the movement of trade between the two countries and the flow of goods procedures, starting from the first of April, the border crossing will be working seven days a week to facilitate customs procedures in both directions.

It was also agreed that the meeting of the Joint Customs Technical Committee would be held during the second half of May 2021.