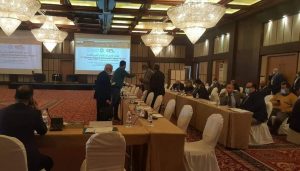 This morning, the Third German-Libyan Economic Experts Forum, organized by the General Union of Libyan Chambers of Commerce, started at the Radisson Blu Mahary Hotel in Tripoli.

The forum will witness the presence of the Libyan Minister of Economy and Trade, Mohamed Hwej, National Oil Corporation chairman, Mustafa Sanalla, the German Ambassador to Libya and a number of German company officials, and the chairman of the General Union of Libyan Chambers of Commerce, Mohamed Raeid.

The forum aims to discuss cooperation opportunities between Libya and Germany in various fields, including oil, transportation and communications.

It will be recalled that the First edition of the Forum was held in March 2019 in Tunis. The Second edition was held in the same year in Berlin.