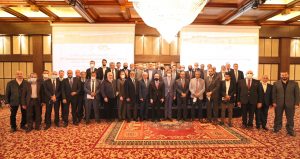 Speaking during the Third German Libyan Economic Expert Forum held in Tripoli yesterday, National Oil Corporation (NOC) chairman, Mustafa Sanalla said that despite these difficult times the world is going through due to the Corona pandemic, he looked forward to opening horizons for cooperation with the German side in the field of oil and gas and the associated services. He also pointed to the strong historical economic relations that have linked German companies with the NOC for decades.

Sanalla added, “I would like to seize this opportunity to extend my deep thanks to the German government for hosting all the Libyan parties and influential regional countries in January 2020, and I believe that the outcomes of the Berlin Conference are what greatly led to us reaching the positive results we are seeing today on the ground represented in the formation of a Government of National Unity, stopping the conflict, and moving towards supporting the economy, and I believe one of these accomplishments is our presence together in this forum.”

The NOC chairman also explained that there are an unlimited number of German companies in various fields that have already returned to work, explaining that he wishes to enter a greater number of German companies in the field of oil and gas to benefit from their expertise to develop the sector and advance it because of the great importance it represents for the Libyan state, being the backbone of life and the main economic engine of the wheel of development in Libya.

During the forum activities, many economic topics and issues in the vital fields of the country were discussed, on top of which was the oil sector, as well as electricity.

With regard to the oil sector, the participants asked many questions, many of which were answered by NOC Chairman, explaining the challenges faced by the Libyan oil sector, and the prominent role played by the NOC over the past years in supporting the country’s economy and maintaining production rates in very difficult circumstances, under its lack of the necessary budgets to do the work entrusted to it.

At the end of the forum’s activities, the Board of Directors of the National Oil Corporation, in the presence of Chairmen of the Management Committees of its affiliated oil companies, held a meeting with Chairmen and Representatives of German companies in the field of oil and energy, during which they discussed the development of joint cooperation in various fields in the oil industry, including exploration, drilling, maintenance, training and other important matters that will contribute to economic development in the State of Libya, revive its economy, and broaden the base of partnership to serve the interests of the two countries.