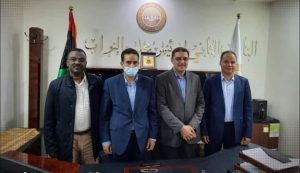 A bloc of over 20 boycotting parliamentarians re-join the HoR (Photo: Social media).

A bloc of 20-odd boycotting members of parliament yesterday agreed to re-join the full proceedings of the internationally recognized House of Representatives (HoR).

The news was reported by Libyan state Alwataniya TV.

The bloc is made up of mainly Tripoli/western Libya-based members who had refrained from attending the reunified HoR sessions in Sirte and Tobruk that had respectively endorsed and sworn-in the new Aldabaiba-led Government of National Unity.

The news came after a meeting in Tripoli today between the Tripoli bloc and HoR First Deputy head Fawzi Al-Nuwairi.

The western-based parliamentarians had boycotted the eastern-based HoR in protest at its support for Khalifa Hafter for the war he had waged on Tripoli between April 2019 and June 2020.