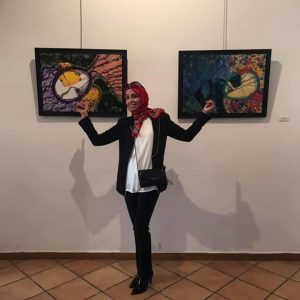 Fatima Furgani, an emerging female artist from Tripoli, Libya, says women are represented in her drawings and in the Libyan art scene. She says there is a healthy and fruitful competition between them and a number of them have broken through onto the international scene through exhibitions – despite Libya’s wars, hardship and instability.

”I like to express through drawing. Woman are in my paintings with special, somewhat “surreal symbolism”, derived from the culture and nature of the place and a recall of memory and stock readings.

The war and the Coronavirus pandemic have certainly affected everyone, but we are continuing to work.

Art in Libya exists and still continues. It has never stopped. However, the issue of buying and selling artists’ works varies and is almost stalled due to the recent deterioration of the economy and tourism.

The general public are interested in their livelihood. The stability and safety of the country has a big role to play, and now everyone is struggling to survive.

However, there were paradoxes during the wars in that that special art exhibitions and micro-projects were held, and women had a share in these. Many of them have appeared on the surface through their strong will. Some of whom received international awards for their participation in exhibitions outside Libya.

This has put many of them in a good competition with one another to advance themselves and the country despite the obstacles.

We hope that the Libyan Ministry of Culture will do its part to support artists, for example, to provide special ceremonies for female artists, to support them when they participate in exhibitions outside and within the country”.