Over 1,000 solar lights to be installed in Sebha: UNDP 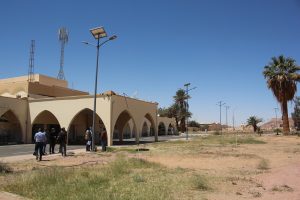 Over 1,000 solar light poles will be installed in Sebha by the UNDP project (Photo: UNDP)

Through the SFL, UNDP is implementing one of the biggest projects in terms of value. In addition to that, it is an innovative environment friendly solution to improve people’s sense of security during power cuts and enhance commercial activity at night. Replacement of a traditional streetlight system with solar road lighting will reduce energy consumption as well.

Covering squares, car parks and internal roads of Sebha Airport and two other segments on the Airport -downtown road, 284 light poles have already been installed. Flights have recently resumed in Sebha and the infrastructure is now able to improve services to residents and more than 7,000 travellers per month from or to the south at night and during power outage.

”Today, we can notice an increase of the traffic on the Jamal Abdel Nasser Street that leads to the airport until late hours at night. This project is contributing to enhancing security, stability and social cohesion in Sebha and everyone is looking at it with admiration. It is great evidence of the successful partnership between UNDP and Sebha Municipal Council.”

On his part, the director of Sebha Airport, Mr. Mohamed Wahida stated: ” Sebha airport was like a lonely and frightening place, completely dark. Today, workers can work until late at night in security. We have an average of ten commercial flights per week and this is going to increase up to 16 flights per week starting April 2021.”

”This project is not only contributing to achieving the 2030 Agenda for Sustainable Development and the SDG7 (Affordable and clean energy), but is also helping to improve security and reduce crimes, facilitating economic activities thus enhancing social cohesion and benefitting people from several municipalities in southern Libya. ”

The SFL, implemented by UNDP with the support of the Government of Libya and 13 international partners, works in collaboration with national authorities and public companies to support municipalities to rehabilitate essential service facilities and boost capacities to improve basic service delivery around the country.