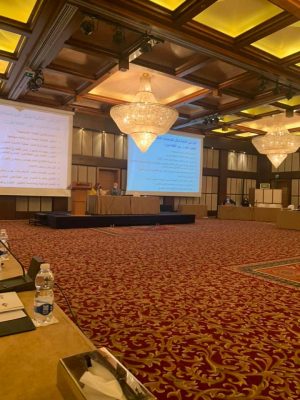 A meeting was held in Tripoli to arrive at a sustainable partnership between the Libyan private and public sectors (Photo: LBC).

A meeting was held on Thursday (1 April) in Tripoli to discuss how a sustainable partnership between the Libyan private and public sectors could be reached, the Libyan Business Council (LBC) reports. The aim of the meeting was to create a suitable environment for private sector business in Libya.

The event was organized by the National Centre for Decision Support and the U.S. Pragma Corporation. Pragma, through USAID, is responsible for implementing the Libya’s Public Finance Management reform (PFM).

The meeting included representatives from the public sector, the LBC and the Libyan General Union of Chambers of Commerce, and several economic and academic experts.

The meeting dealt with the methodological frameworks for dialogue and mechanisms, as well as a summary of successful experiences of dialogue between the public and private sectors in other countries.

The LBC reported that the attendees concluded the necessity of establishing a body consisting of representatives of the two parties with the aim of managing the dialogue and developing proposals that would pave the way for creating a positive partnership between the public and private sectors.