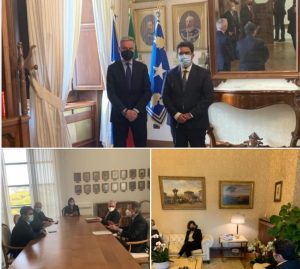 Italian airspace will soon be reopened to Libyan aviation, the Libyan embassy in Rome reported yesterday.

It said this comes within the framework of support and affirmation of Libyan-Italian relations, and to activate joint cooperation between the two countries in various fields and coordination between the newly installed Libyan Government of National Unity and the Italian government. The move aims to activate joint programmes and implement the commitments made by the Italian authorities towards Libya, through the activation of the Treaty of Friendship and agreed Items.

The Rome embassy statement came after Libya’s ambassador Omar Tarhuni held a number of meetings, through invitations from Italian government ministers, the first of which was the meeting with Italy’s Minister of Foreign Affairs, Luigi di Maio, Minister of Defence Lorenzo Guerini and Minister of Interior, Luciana Lamorgese.

During these meetings, Tarhuni sought to find out about the stalled joint projects, means to advance and activate them and following up on what has been implemented in them.

Tarhuni also confirmed that the upcoming visit by new Italian Prime Minister Mario Draghi to Libya has been prepared and arranged, which will be his first visit outside Italy after taking office on 13 February.

The embassy also reported that yesterday, an expanded meeting was held at the Italian Ministry of Foreign Affairs in Rome, to discuss in detail all the common files, the most important of which is the activation of the highway project and the completion of the various projects of memoranda of understanding.

The embassy also revealed that there will be a mission from the Italian Civil Aviation Authority (ENAC) and a delegation from the (ENAV) group that will visit Libya early next week to inspect Libyan airports to complete the technical measures in preparation for the opening of aviation airspace between the two countries.