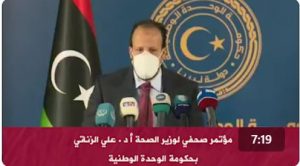 Speaking at a press conference yesterday to celebrate the arrival of the first batch of ant-Coronavirus vaccines to the country (one of the last in Africa and the Arab world to receive vaccines), Libya’s Health Minister Ali Zanaty revealed that the batch had arrived from the UAE.

The 100,00 plus doses were the Russian Sputnik V brand.

Notably, his prime minister, Abd Alhamid Aldabaiba, had omitted to mention this fact during his speech celebrating the arrival of the vaccine yesterday.

The UAE revelation was full of huge political irony and exposed the role the supply of vaccines now plays in the pursuit of state foreign policy. The UAE, it will be recalled, was one of the main allies of Khalifa Hafter, his Libyan National Army, the eastern Libyan based government and House of Representatives.

The UAE was accredited by Tripoli of being Hafter’s main arms supplier and military backer in the war on Tripoli.

Equally, the U.S considers the Wagner private security forces used by Hafter and still present in central/eastern Libya to be a proxy for Russia.

How ironic then that the first ever batch of anti-coronavirus vaccines to arrive in Libya are not European or American – the so-called steadfast allies of democratic Libya – but from Russia via the UAE. The revelation shows indeed that a few months is a very long time in politics and how political alignment can change overnight.

One million vaccines to arrive by 11 April

The Health Minister confirmed that further batches will arrive in succession and that the second batch will arrive on Wednesday consisting of 300 to 400,000 doses.

Furthermore, he confirmed that by next Sunday (11 April) a total of one million vaccine doses would have arrived in Libya. 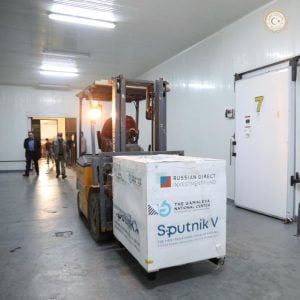 A total of 10 million vaccines of various brands expected

He said the National Centre for Disease Control (NCDC) has received the vaccines at its warehouses stored at a temperature of -18.

He added the vaccines will be distributed to areas which have the necessary cold storage which are currently Benghazi, Beida, Tripoli and Zliten. They will be distributed pro rata according to population density and administered through 430 vaccine centres across Libya.

The vaccine will be given according to the priority categories:

Minister Zanaty said he will be the first to receive the Sputnik vaccine, in his capacity as Health Minister.

It is understood that the motivation for this move is twofold: first to encourage those who do not believe in the vaccine (the so-called anti vaxxers) into coming forward and receiving it, and secondly to counter the anti-Russian Sputnik V bias.

Many Libyan prefer the American Pfizer and Moderna vaccines. The AstraZeneca vaccine has also got a bad press in Libya.

Zanaty gave the credit for the arrival of the vaccines to his prime minister Aldabaiba.