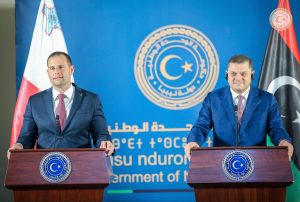 The reception, which took place at the Prime Ministers’ Tripoli headquarters, was attended by the Ministers of Foreign Affairs and Interior, the Minister of State for Cabinet Affairs and the Ambassador of Libya to Malta.

At the joint press conference Aldabaiba confirmed the depth of relations and bilateral cooperation in all fields, explaining that his government will work to strengthen and develop these relations in the interest of the two friendly peoples.

Aldabaiba said Malta played an important role in resolving the conflict in Libya by organizing several meetings between Libyan parties.

He added that the two countries are working to open areas of cooperation at the bilateral and regional level, pointing to trade and the resumption of air traffic as the most important of these areas.

These included strengthening Maltese diplomatic presence to provide consular services, especially the provision of visas inside Libya, facilitating the procedures of Libyan citizens residing in Malta and restoring banking activity with Maltese banks to normal, and other common services that serve the interests of the two countries.

Abela announced the return of air traffic between the two countries in the coming period, expressing his happiness at the resumption of work of his country’s embassy in Tripoli in the coming days, to be a bridge to communicate with Libyan citizens.

He said his government looks forward in the coming period to strengthening relations and cooperation between the two countries, stressing the continued full support for Libya in many areas, especially economic and security.