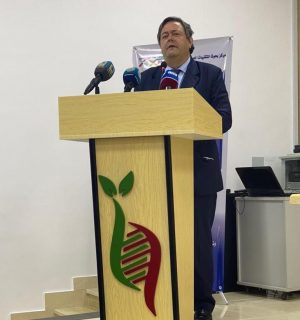 The Ambassador participated yesterday in the meeting held at the Libyan Biotechnology Research Centre in Tripoli with Deputy head of the Presidency Council, Musa Koni, and Libya’s Ministers of Education and Higher Education.

The meeting presented the results of the first comparative study in Libya on mutations of the Coronavirus, carried out by Libyan scientific institutions / the Biotechnology Research Centre by employing advanced genomic sequencing technology, taking into account the genetic and spatial diversity of the population. Their discoveries mark an important step in the response to the pandemic, Moussa Koni said.

This qualitative leap in comparative research, Koni added, took place in cooperation with research centres in Spain, the scientific partnership that we pause to thank, and I thank the Spanish government and its ambassador who attended with us this important scientific event. Facing the pandemic is a global battle, and Libya today, through our scholars, has contributed a stone of special importance, concluded Koni.

The group describes itself as ‘‘one of the largest hospital groups in Spain, not only for its volume, but also for its pioneering character to always be at the forefront of private medicine in Spain’’.