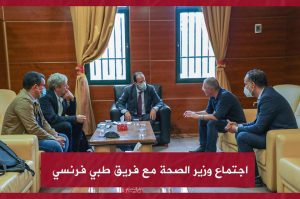 During a meeting at the Ministry in Tripoli yesterday, Libya’s Minister of Health, Ali Zanati, welcomed a French medical team as part of the Ministry’s plans to localize medical treatment.

The Minister gave the green light to initiate a contract to purchase the service to localize treatment, as it saves time, effort and money, and most importantly, provides a successful and comfortable service domestically for patients.

The Health Ministry noted that the French medical team had previously performed many surgeries at the Benghazi Medical Hospital within a specialized team, including orthopaedics, brain and nerve surgery, cardiovascular surgery, tumour surgery, paediatric surgery and other precision surgeries, which the Ministry said had met with great demand and successes in the level of precision operations.

The Minister stressed that the aim of these experiences is to localize treatment in Libya because of the time and effort it saves to the patient instead of going for treatment abroad, in addition to benefiting from the training of medical personnel.