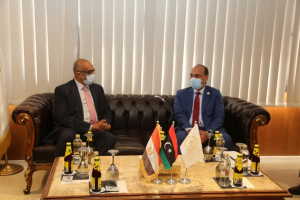 The delegation was received by the head of the municipality’s steering council, Sager Bujwari, in the presence of representatives from the Benghazi office of the Ministry of Foreign Affairs and International Cooperation.

The meeting dealt with the procedures related to reopening the Egyptian consulate in the city of Benghazi in the near future, correcting the legal status of Egyptian workers in coordination with the concerned authorities and joint cooperation regarding holding a meeting for Egyptian and Libyan business leaders in the city of Benghazi through the commercial chambers of the two parties, in addition to overcoming the difficulties facing the Egyptian School in Benghazi.