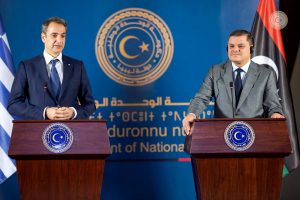 Libya and Greece are two pivotal states in the Mediterranean, two countries with shared common prospects for the future. The recent visit by the Greek Prime Minister Kyriakos Mitsotakis and the Foreign Minister Nikos Dendias to Tripoli is a crucial development not only in bilateral ties, but also for greater regional stability. The official visit at the highest level marks the will of the two countries to establish a framework of effective cooperation in all fields. The Greek leadership met with Prime Minister of the Government of National Unity (GNU), Abd Alhamid Aldabaiba.

The two countries agreed in reopening the Greek Embassy in Tripoli and the Greek Consulate in Benghazi. In this context during a joint press conference Aldabaiba stated that Libya is ready to form joint committees with Greece to discuss maritime borders. This is a clear reference of the will of Libya not only to fully restore relations with neighbouring Greece, but also to adopt positive diplomatic measures. Cooperation between Libya and Greece can cover many fields, diplomatic, military, financial and cultural.

On a diplomatic level, Libya and Greece can move decisively forward. The two countries should proceed with signing an agreement for the full delimitation of the whole extent of their national Exclusive Economic Zones based on their previous diplomatic contacts. Such a bilateral agreement will provide the proper delimitation of the EEZs in accordance with the legal provisions of the international law, especially the United Nations Convention on the Law of the Sea (UNCLOS). Both countries have signed and accepted this fundamental legal document. The time has come to implement it and create new geopolitical realities of regional alliance. By signing a complete agreement for the full delimitation of their respective national EEZs in an area extending on a West to East axis, Libya and Greece shall ensure regional stability and protect their national interests.

On a military level Libya and Greece share close ties over the last decades. There are already more than 280 Libyan officers that have graduated from Greek military schools. Future military cooperation can include joint aeronautical exercises and exchange programs for officers. More importantly, concerning combating illegal migration towards the EU, cooperation of Libya and Greece, as well as other Mediterranean countries, such as Italy, Malta, and Egypt, is essential. In this context, the Libyan Coast Guard has a prominent role in dealing with the issue of illegal immigration from the territory of Libya.

On a financial level, Greece as a member of the European Union can cooperate with Libya on two levels. First, Greece can prove its steadfast commitment to a new stable economic environment by guaranteeing steady access to generous external EU financial aid for Libya. Second, Greece with its impressive tanker fleet can contribute to export of Libyan oil towards the EU. In his statements Prime Minister Aldabaiba highlighted cooperation between Libya and Greece in the economic and investment field.

The two countries are by now ready to reactivate all agreements in the field of energy, including renewable energy and electrical connectivity, and maritime trade. Finally, on a cultural level both countries are inheritors of a great historical past with their territories rich with antiquities and historical monuments.

Libya and Greece are neighbours in the Mediterranean, in fact Greece is the closest European state to Libya, as the islands of Gavdos and Crete lie opposite from Libyan shores. The two countries share extensive sea borders. Greece, as a member of the European Union, can greatly assist Libya in its decisive stance to move forward and create a new stable and prosperous environment.

The time has come for a new perception of regional alliances and cooperation in the Mediterranean and this is based on the signing of a full EEZ deal between Libya and Greece based on previous contacts and on international law.