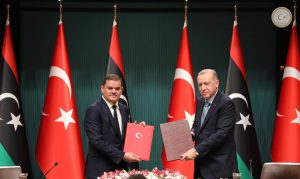 The Libyan ministers held several bilateral meetings on the side-lines of the meeting with their Turkish counterparts, to discuss various cooperation files. Six agreements were signed:

1- Protocol to establish a power station in Libya.

2- A Memorandum of Understanding to establish three power stations in Libya.

3- Memorandum of Understanding to establish a new passenger terminal at Tripoli International Airport.

4- Memorandum of Understanding to build a new shopping centre in Tripoli.

5- Memorandum of Understanding between Turkey and Libya on strategic cooperation in the field of media.

6- The joint declaration of the first meeting of the High-level Strategic Cooperation Council between Turkey and Libya.

Yesterday, under the auspices of the Prime Minister Aldabaiba, and President Erdogan, the Council met ‘‘with the aim of improving the relationship based on friendship and solid brotherhood on the basis of mutual benefit, respect and equality, deepening and diversifying cooperation between the two countries’’, the Libyan government reported.

During the meeting, the importance of protecting Libya’s sovereignty, independence, territorial integrity, and political unity throughout the country in the east, west and south was emphasized, and that the Presidency Council and the Government of National Unity are the only legitimate executive authority for Libya, which was identified through the elections held at the Libyan Political Dialogue Forum meeting.

It was also stressed that the problems in Libya can be solved through political methods led by Libya and owned within the framework of the 2015 Libyan Political Agreement and the relevant Security Council resolutions, the conclusions of the Berlin Conference and the Libyan Dialogue Forum road map, in addition to the importance of Turkey’s contribution to ensuring a permanent and sustainable cessation of launching fire.

During the meeting, it was highlighted that the Memorandum of Understanding signed between Turkey and Libya, especially the navy, carries importance for the common interests of both countries, regional stability and cooperation, and the validity of the principles contained therein, and an expression of the will to move forward in framing them, with an emphasis on the need to hold a regional conference for all parties. Supporting dialogue and cooperation in the eastern Mediterranean ends to guarantee the rights of all.

It was also agreed that a regional conference should be held to ensure dialogue and cooperation in the eastern Mediterranean.

It should be noted that both sides wish to enhance cooperation for security reform and capacity building as needed and at the request of the Libyan government.

Emphasis was placed on condemning terrorism regardless of its motives and in all its forms and manifestations, stressing the importance of working in full solidarity in combating terrorist groups and criminal organizations that pose a threat to both countries.

Increase bilateral trade to US$ 5 billion

It was also agreed to increase the volume of bilateral trade to 5 billion US dollars in a balanced manner.

It is noteworthy that the next meeting of the Joint Economic Committee will be held as soon as possible, with the resumption of negotiations on the Free Trade Agreement, in addition to the possible role of Turkish contractors and the private sector in the reconstruction process in Libya and the emphasis on commitment to addressing the outstanding issues of Turkish companies, in accordance with the correct contracts of these companies and within the framework of legislation in force in the two countries in a manner that guarantees the interests of the contracting parties.

The two sides stressed the importance of improving and deepening cooperation in the field of energy for the mutual benefit of both countries, and express their willingness to start work in this regard.

A mechanism for reaching an understanding was discussed regarding conducting the field examination required for Turkish Airlines to resume its flights to Libya.

During the meeting, the two sides agreed to organize a training program for Libyan diplomats in the first phase, according to the Memorandum of Understanding between the Diplomatic Academy of the Ministry of Foreign Affairs in the Republic of Turkey and the Institute of Diplomatic Studies at the Ministry of Foreign Affairs and International Cooperation in the State of Libya, which was signed on March 14, 2012.

It was also agreed to hold political talks between the foreign ministries periodically at a level to be determined by the concerned ministers through diplomatic channels.

It was agreed to commit to strengthening coordination between their health institutions in combating epidemics, primarily against the Coronavirus pandemic.

It was also agreed to work in unity on global, regional and national security issues, in compliance with their national interests and security concerns.

The two sides expressed their confidence that the regular work of the committee will enhance the strategic and brotherly relations between the two countries and contribute to strengthening the historical ties between their peoples.

The two sides agreed to closely follow the results of the Committee’s first meeting, and hold the next meeting in Libya.