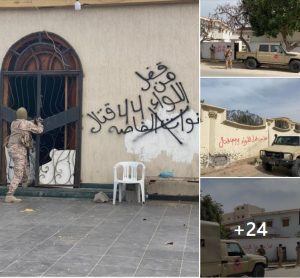 The 444th Combat Brigade, a security force aligned to the Libyan state, announced Monday that it had closed 11 unofficial militia headquarters in Tripoli.

It stated that the closures come as part of the Tripoli Military Zone plan to impose security in the city.

The militia dens were in the Salah al-Deen and al-Shouk areas in the south of Tripoli.

It will be recalled that with the pretext of the anti-Khalifa Hafter war on Tripoli effort, many militias moved into Tripoli and established themselves in dens across the city.

They have occupied private property, caused damage and steeling contents, harassing locals, as well as being unsociable neighbours to residents.

Even though the war with Hafter ended in June 2020, many, especially militias hailing from outside the city, had refused to leave their dens.