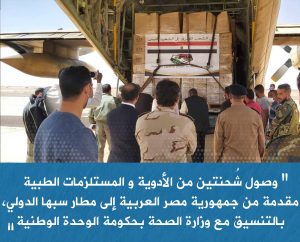 Two shipments of medicines and medical supplies, provided by Egypt, arrived at Sebha Airport yesterday, in coordination with Libya’s Ministry of Health, the Ministry claimed.

However, the shipments and optics of an Egyptian military transporter landing in Sebha have raised much debate on Libyan social media.

On the one hand, there is a feeling that Libya should not be receiving medical aid from Egypt in the first place.

Many are even doubting that the cargo plane had landed with the Libyan government’s consent.

There is also anger by the anti-Khalifa Hafter camp that it is a political gesture in support of Hafter by his ‘‘war on Tripoli’’ ally Egypt. It is also seen by some of his critics as another attempt by Hafter to resurrect himself and announce that he is still an effective power on the ground and that the new unified Libyan government must acknowledge that and accommodate him.