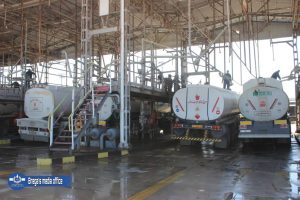 Brega said fuel tank number 120 was loaded with 25 million litres of petrol and today commenced filling fuel transport trucks to distribute to petrol stations. The operation was possible after the network of supply pipes between the storage tanks and filling unit were also maintained.

Brega was proud to announce that despite the scarcity of resources and spare parts its local technicians and engineers were able to make the depot operational.

The announcement should mean fewer petrol shortages and queues at petrol stations.

Brega says no justification for queues at petrol stations as petrol stocks are available | (libyaherald.com)

Brega warns against panic buying, says there is no fuel shortage | (libyaherald.com)