Bosnian embassy in Tripoli reopens and resumes issuing of visas 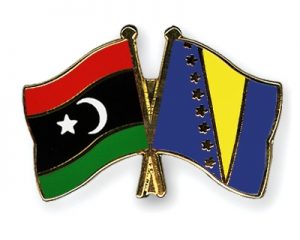 The Bosnian embassy in Tripoli will start issuing visas from today (Photo: Crossed-flag-pins.com).

The Libyan Embassy in Bosnia and Herzegovina announced yesterday that the Bosnian Embassy in Tripoli is to resume the issuing of visas.

The Libyan embassy in Sarajevo said the decision came thanks to joint efforts, meetings and coordination between it and the Bosnian Ministry of Foreign Affairs, Libyan citizens can now submit applications to obtain a visa to visit Bosnia through its embassy in the Siyahia area in Tripoli, starting today.

The Libyan embassy reported that this important step come after it had reached an agreement with the Bosnian Ministry of Foreign Affairs where the two sides agreed to provide all facilities to the citizens of the respective countries to contribute to supporting cooperation of mutual interest, especially in the field of tourism, trade exchange, investment and developing cooperative relations between the two countries.