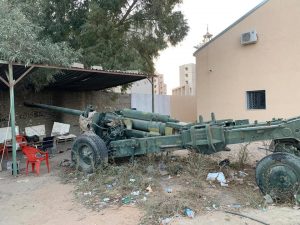 23 militia dens in south Tripoli have been vacated as part of the capital’s security plan (Photo: 444th Combat Brigade).

The 444th Combat Brigade, a security force aligned to the Libyan state, announced Sunday that it had now vacated 23 unofficial militia dens in Tripoli.

These were also in the Salah al-Deen and Triq al-Shouk areas – all areas in south Tripoli which had been a battlefront with the pro-Khalifa Hafter forces during the war on Tripoli.

The militia dens were also emptied of weapons and ammunitions.

It specifically referred to these ‘‘military groups’’ as those that ‘‘do not take orders’’ from official channels.

It stated that the closures come as part of the Tripoli Military District plan to impose security in the city.

The properties were returned to their rightful state or private owners.