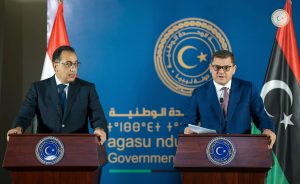 The two sides discussed regional and international issues of common interest, as the importance of intensifying coordination and political consultation on various issues was emphasized.

The Libyan government reported that Aldabaiba said during the meeting that the security, economic and political conditions that the region is going through need to conclude strategic partnerships in various fields in order to be true partners in development and development.

The meeting discussed resuming the work of the Egyptian embassy, ​​strengthening consular work to provide services to all, and facilitating transit and movement procedures for citizens and smooth entry of goods and goods through the opening of sea lines for passengers and freight between the ports of the two countries, in addition to the reopening of direct flights from Libyan airports to the Egyptian capital Cairo, which will be an important factor for cooperation in other fields.

During the meeting, MoU’s were signed in the fields of electricity, communications, infrastructure, technical cooperation, investments, transport, health and energy.

For his part, the Egyptian Prime Minister affirmed Egypt’s support for Libya and its keen interest in the unity of Libyan institutions and development projects, and achieving national reconciliation, in order to complete its historic tasks in Libya.

Madbouly invited Aldabaiba to visit Egypt to complete the procedure of cooperation and joint agreements between the two countries.

The two sides also confirmed the return of the eleventh session of the joint Libyan-Egyptian Higher Committee, within the framework of developing and strengthening joint cooperation between the two countries.