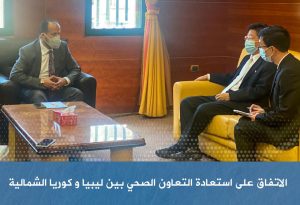 Libya’s Health Ministry is seeking North Korea’s help in managing some of its hospitals in the south of the country.

“We will work to restore relations between the two countries in the health field.”, Minister Zanati said, affirming the depth of relations between Libya and Korea and praising the efforts made by North Korean medical and auxiliary medical personnel working in hospitals, and the good impact they have had on the people of the south.

The mechanism for returning medical and auxiliary medical personnel was discussed as soon as possible to contribute to the success of the localization of treatment programme the Ministry of Health is pursuing.

Minister Zanati asked the ambassador to open the door for cooperation between the two countries, through logistical support to the sector, such as providing flying ambulances, ambulances, etc., and receiving the management of some hospitals in the south.

North Korea’s ambassador, meanwhile, said “We have a long history of health cooperation between the two countries.”.

He emphasized that Korea has a long history of health cooperation with Libya, and that he will strive for its return as soon as possible after its interruption due to the security conditions, the global crisis and the precautionary restrictions of the Corona pandemic.