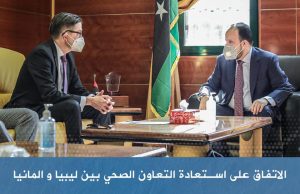 Libya’s Health Ministry seeks Germany’s help in facilitating travel procedures for patients who suffer from critical conditions that are difficult to treat at home, sending German experts in subspecialties to Libya to conduct operations at home to reduce the financial cost, and transferring German expertise to the medical and auxiliary elements.

It also seeks help in rebuilding its primary health care system, providing medical equipment and in handing over the management of some hospitals to German companies.

The news was revealed yesterday during the meeting between Libyan Health Minister Ali Zanati and German Ambassador to Libya Oliver Owcza to discuss ways of cooperation between the two countries in the field of health.

Minister Zanati emphasized the role of the German embassy in Libya in clarifying what he said was the true picture of the situation inside the country, as, he said, there is security stability in Libya, contrary to what is being circulated in terms of news. “We hope to build bridges and invest in the relationship between the two countries in the health field at the highest levels.”, he added.

German Ambassador Owcza said “We will work hard to restore healthy cooperative relations between the two countries as soon as possible.”

He stressed his happiness for the return of relations between the two countries, and that Germany understands all the challenges facing the health sector in Libya after a long war that it suffered, not to mention the global situation due to the Corona pandemic and the precautionary restrictions related to it, and that Germany will seek to build a good idea about Libya.